The public battle between President Donald Trump's economic and medical advisers stretched into another day after Peter Navarro, the senior White House trade official, apparently broke protocol by publishing an opinion article trashing Dr. Anthony Fauci late.
Fauci, in his most forceful pushback to date against White House attempts to discredit him, warned his fellow administration officials a day later that they were harming the President's credibility. Speaking to The Atlantic, Fauci called White House attacks on him "bizarre" and said they ultimately damaged Trump.
"I cannot figure out in my wildest dreams why they would want to do that," he said. "I think they realize now that that was not a prudent thing to do, because it's only reflecting negatively on them."
He was speaking as the White House worked to distance itself from Navarro's opinion piece, which contained viewpoints similar to opinions voiced by Trump himself and distributed by the White House over the weekend.
The White House communications office insisted Navarro did not clear his article through them before it was published in USA Today. Trump himself called the piece a mistake.
But the sentiment Navarro expressed — that Fauci, the nation's top infectious disease specialist, had been wrong on multiple occasions during the pandemic — was the same one White House officials espoused over the weekend when they questioned his record to reporters.
Trump on Wednesday brushed off the episode in the Oval Office before taking a more forceful stance as he departed the White House for Atlanta.
"He made a statement representing himself," Trump said when questioned about the article. "He shouldn't be doing that. I have a very good relationship with Anthony."
"We're all on the same team," Trump said, "including Dr. Fauci."
Still, Trump stopped short of refuting or condemning the content of the article or detailing any recriminations for his top trade aide.
The confusing and fraught dynamic between obviously warring factions of the administration seemed to epitomize the culture of infighting that Trump has accepted and, at times, actively cultivated during his tenure in office. That it is occurring in the middle of a global pandemic has only amplified the questions of competency surrounding the administration's response to the crisis. #Fauci #CNN #News 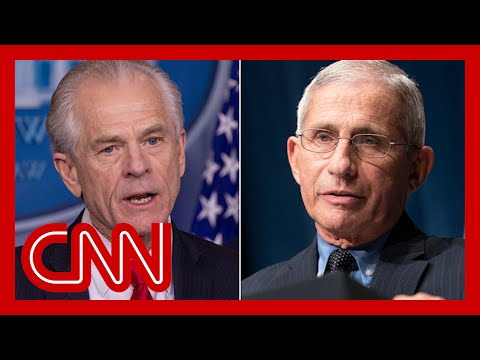 How did the Supreme Court become so polarized? l ABC News