Ex- officer Brett Hankison was indicted on charges of wanton endangerment in the first degree.
READ MORE: https://abcn.ws/2RUZqF3 A Kentucky grand jury indicted former Louisville police officer Brett Hankison on three counts of wanton endangerment in the first degree in a shooting in March that killed Breonna Taylor, but neither he nor the other two officers involved in the fatal encounter were charged in her death. Louisville Metro Police Department officers Myles Cosgrove, Sgt. Jonathan Mattingly and Hankison unleashed a barrage of shots into Taylor's apartment while serving a warrant in March. The charges against Hankison, who fired 10 shots into Taylor's apartment, stem from the errant bullets that penetrated a wall of the residence and entered a neighboring apartment occupied by a child, a man and a pregnant woman, Kentucky Attorney General Daniel Cameron said at a news conference following the grand jury's announcement. #BreakingNews #BreonnaTaylor #Kentucky #Police 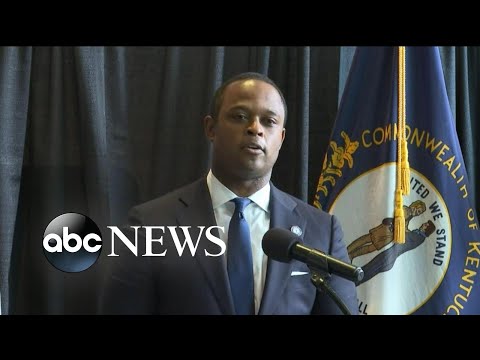 ‘Gutfeld!’ talks how a phone dropped out of a baseball player’s pocket