Vote counting is underway in the city of Bessemer, Alabama, where workers are standing up to the second largest private employer in the United States: Amazon. Nearly 6,000 workers are now at the center of the most closely-watched unionization effort in recent US history. While Amazon workers make more than double the federal minimum wage in the United States, which is $7.25 an hour, many workers complain about the lack of respect and safety measures. They say that the pay is not commensurate with the extreme pressures and pace of their jobs. If the Bessemer employees do succeed, they will be the first Amazon workers to unionize in the United States. Amazon’s profits grew by 84 percent in 2020 fueled by an online shopping boom during the pandemic. The company hired over 450,000 new staff across the US over the last year, but is facing increasing scrutiny in Washington, particularly after its founder Jeff Bezos, reportedly the richest person in the world, made $58 billion between March 2020 and March 2021. So what do the challenges facing this unionization effort tell us about the state of worker’s rights in America? Guests: Nina Turner- Democratic candidate for Ohio’s 11th Congressional District, former Ohio State Senator and former national co-chair for Bernie Sanders’ 2020 presidential campaign Christian Smalls- Activist and former Amazon warehouse worker Richard Berman- Executive Director of the Center for Union Facts Watch other episodes of Inside America ➡ Weekly in-depth interviews with American opinion and policy-makers exploring the issues shaping US politics. 👉http://trt.world/InsideAmerica​ Follow us: 👉www.twitter.com/_InsideAmerica 👉www.twitter.com/Ghida_Fakhry Subscribe: 👉Apple Podcasts: https://apple.co/3d0LYLy Subscribe: http://trt.world/subscribe
Livestream: http://trt.world/ytlive
Facebook: http://trt.world/facebook
Twitter: http://trt.world/twitter
Instagram: http://trt.world/instagram
Visit our website: http://trt.world 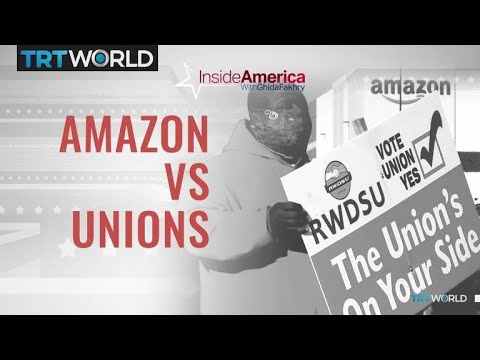 Tucker: They suddenly care about borders