A pastor in Alabama will face no jail time for raping a 14-year-old girl. Cenk Uygur and Ana Kasparian discuss on The Young Turks. Watch LIVE weekdays 6-8 pm ET. http://youtube.com/theyoungturks/live Read more HERE: https://www.al.com/news/montgomery/2021/10/no-jail-for-alabama-pastor-charged-with-raping-teen-who-got-pregnant-married-him-at-parents-urging.html "A former Alabama pastor charged with raping a 14-year-old girl who he married after she became pregnant will not receive jail time after he reached a plea agreement with prosecutors. Jason Greathouse, who used to minister in Enterprise but now lives in Tennessee, reached a deal with the Coffee County District Attorney’s Office on Thursday that downgrades his charge from second-degree rape, a felony, to contributing to the delinquency of a minor, a misdemeanor, according to court records.
Greathouse, a resident of Hendersonville, Tennessee, agreed to serve two years of unsupervised probation for the 2018 incident, which occurred when he was 24 and the victim was 14, records showed. The pastor also does not have to register as a sex offender under the agreement’s terms. Coffee County District Attorney Tom Anderson said Friday his office made the deal because “there were extenuating circumstances that would have been allowed to be presented by the defense that very likely could have resulted in a mistrial or even a not guilty [verdict] by jury nullification.” Greathouse and the girl, who was 14 at the time of the incident, married at “parental urging” and the two had a child together. Anderson said there are now “issues pertaining to custody/visitation that the defense would argue are the motivation for reporting [the alleged rape] many years later.” The DA said potential jurors could have made the same conclusion." *** The largest online progressive news show in the world. Hosted by Cenk Uygur and Ana Kasparian. LIVE weekdays 6-8 pm ET. Help support our mission and get perks. Membership protects TYT's independence from corporate ownership and allows us to provide free live shows that speak truth to power for people around the world. See Perks: ▶ https://www.youtube.com/TheYoungTurks/join SUBSCRIBE on YOUTUBE: ☞ http://www.youtube.com/subscription_center?add_user=theyoungturks
FACEBOOK: ☞ http://www.facebook.com/TheYoungTurks
TWITTER: ☞ http://www.twitter.com/TheYoungTurks
INSTAGRAM: ☞ http://www.instagram.com/TheYoungTurks
TWITCH: ☞ http://www.twitch.com/tyt 👕 Merch: http://shoptyt.com ❤ Donate: http://www.tyt.com/go 🔗 Website: https://www.tyt.com 📱App: http://www.tyt.com/app 📬 Newsletters: https://www.tyt.com/newsletters/ If you want to watch more videos from TYT, consider subscribing to other channels in our network: The Damage Report ▶ https://www.youtube.com/thedamagereport TYT Sports ▶ https://www.youtube.com/tytsports The Conversation ▶ https://www.youtube.com/tytconversation Rebel HQ ▶ https://www.youtube.com/rebelhq TYT Investigates ▶ https://www.youtube.com/channel/UCwNJt9PYyN1uyw2XhNIQMMA #TYT #TheYoungTurks #BreakingNews 211019__TB01_No_Prison_Time_Pastor 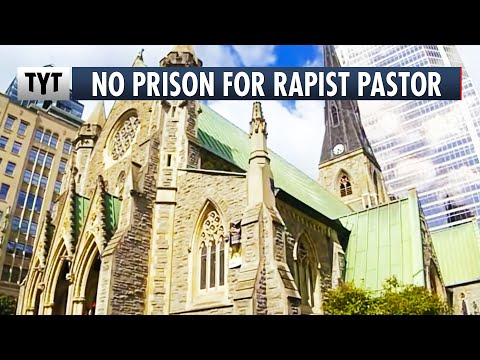