Buffalo, New York Starbucks union organizer Victoria Conklin was fired from the company after she showed up late 20 minutes late to a morning shift after closing the shop a night before. Since she showed up late for the first time in her five-year stint with the company, it’s hard to think that this isn’t a clear act of retaliation. Cenk Uygur and Ana Kasparian discuss on The Young Turks. Watch LIVE weekdays 6-8 pm ET. http://youtube.com/theyoungturks/live Read more HERE: https://perfectunion.us/starbucks-fires-buffalo-union-leader/ "Less than a week after her store in Buffalo won its union election, Starbucks has fired lead union organizer Victoria Conklin in what she says is a clear case of retaliation. Conklin was fired on June 22nd for being late to work for the first time in her nearly five years at the company. The firing came days after the National Labor Relations Board sought an emergency injunction in federal court to force Starbucks to rehire seven other Buffalo union-leaders that it illegally fired over the past six months. “They fired me because they scheduled me to do a ‘clopening,’ which is when you close the store and open it the next morning, and I overslept and was late by 20 minutes,” Conklin told More Perfect Union. “But the store opened on time, we didn’t lose any customers or anything. The only thing I couldn’t serve when we opened was iced tea, because it takes about five minutes to seep.” Several weeks prior, Conklin was given a first write-up and final warning for the way she locked up the cash register before workers at her store went on strike on May 7th. Workers there went on strike over what they called unfair labor practices and unsafe conditions. A coworker had recently been badly burned on the job but forced to continue working with no time off to heal." *** The largest online progressive news show in the world. Hosted by Cenk Uygur and Ana Kasparian. LIVE weekdays 6-8 pm ET. Help support our mission and get perks. Membership protects TYT's independence from corporate ownership and allows us to provide free live shows that speak truth to power for people around the world. See Perks: ▶ https://www.youtube.com/TheYoungTurks/join SUBSCRIBE on YOUTUBE: ☞ http://www.youtube.com/subscription_center?add_user=theyoungturks
FACEBOOK: ☞ http://www.facebook.com/TheYoungTurks
TWITTER: ☞ http://www.twitter.com/TheYoungTurks
INSTAGRAM: ☞ http://www.instagram.com/TheYoungTurks
TWITCH: ☞ http://www.twitch.com/tyt 👕 Merch: http://shoptyt.com ❤ Donate: http://www.tyt.com/go 🔗 Website: https://www.tyt.com 📱App: http://www.tyt.com/app 📬 Newsletters: https://www.tyt.com/newsletters/ If you want to watch more videos from TYT, consider subscribing to other channels in our network: The Damage Report ▶ https://www.youtube.com/thedamagereport Indisputable with Dr. Rashad Richey ▶ https://www.youtube.com/indisputabletyt Watchlist with Jayar Jackson ▶ https://www.youtube.com/watchlisttyt TYT Sports ▶ https://www.youtube.com/tytsports The Conversation ▶ https://www.youtube.com/tytconversation Rebel HQ ▶ https://www.youtube.com/rebelhq TYT Investigates ▶ https://www.youtube.com/channel/UCwNJt9PYyN1uyw2XhNIQMMA #TYT #TheYoungTurks #BreakingNews 220630__TA05_Starbucks_Fires 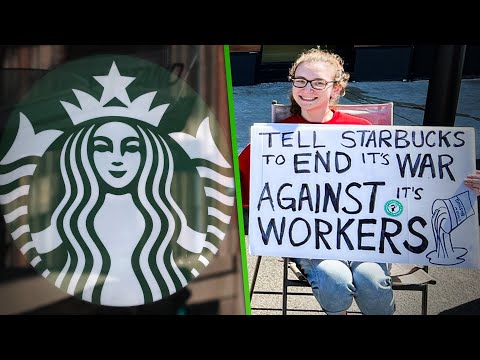 President Biden Delivers Remarks on the Response to Flooding in Eastern...