Journalist Matt Taibbi released a Twitter thread revealing information given by Elon Musk. Donald Trump is calling for The United States to terminate The Constitution. Elon Musk has accused Twitter's former personnel of favoring left-wing candidates. 45,000 North Carolina citizens are without power after local gunfire. Older homeowners are dominating the housing market. An anti-semite had the most ridiculous response to Ana Kasparian’s comments about Ye. After many protests, Iran has supposedly abolished the morality police. Herschel Walker says he feels like “ a dirty old man” for watching children’s television. Nick Fuentes launches an In-N-Out soda into a crowd. A mother was concerned for her son when he saw a sex scene on a flight. Be The Change http://TYT.com/Change
#TYT #TheYoungTurks #BreakingNews Support The Young Turks by Subscribing http://www.youtube.com/subscription_center?add_user=theyoungturks Like Us on Facebook: http://www.facebook.com/TheYoungTurks
Follow Us on Twitter: http://www.twitter.com/TheYoungTurks Buy TYT Merch: http://shoptyt.com 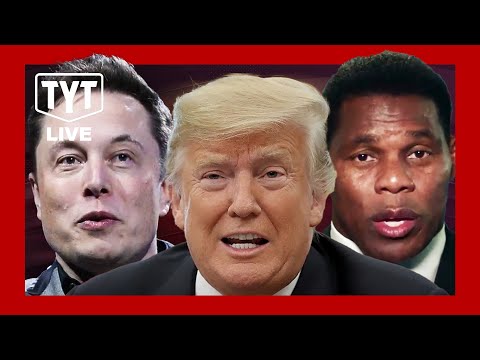